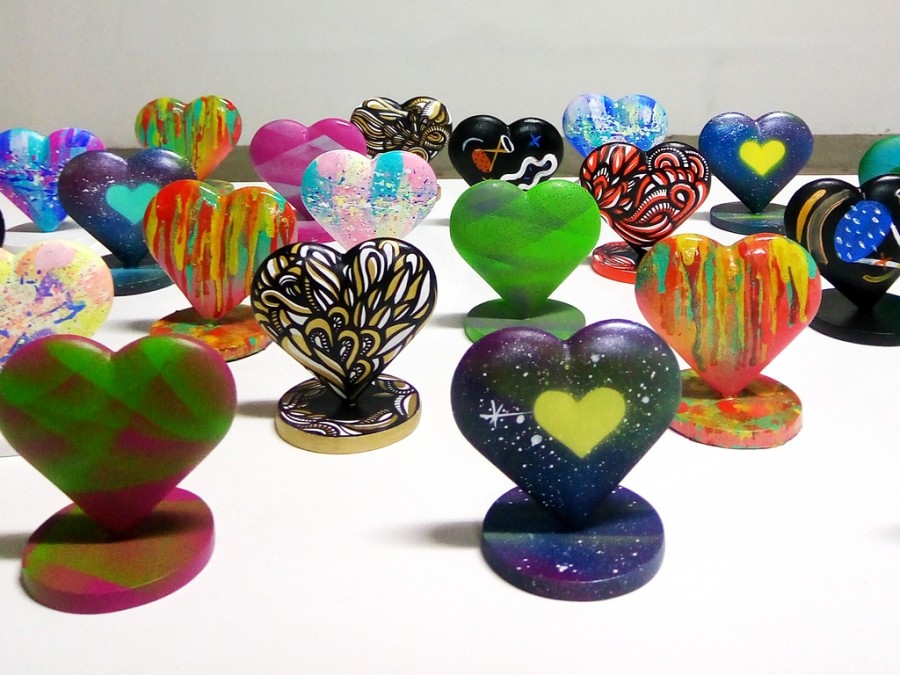 Kayo and I spent our Valentines weekend very differently this year. While I would normally opt for a quiet romantic dinner to celebrate, I can’t say I did not enjoy how we spent it this time. It was definitely one for the books! Kayo and I, together with a bunch of other talented and adored local (and one foreign) artists took part in Ayala Mall’s Love’m Hearts campaign. It was a celebration of love and art at all Ayala Malls nationwide!

Kayo’s primary role was to bring in artists and direct the painting of giant heart installations situated in eight different Ayala Malls in Luzon over the weekend. There were ten hearts assigned to his care, some of them 8 feet high, some 12, and the artists who painted them were:

Some of these artists started working as early as Saturday, Feb 13, in their respective locations, where passers-by and mall goers could freely watch their progress and take photos. Others started to paint on Valentine’s Day itself and finished the very same day.

This entire campaign actually took off with a private luncheon on the 12th by Ayala Malls at Glorietta 5. It was held in an emptied furniture showroom which was converted into a gallery and event space specially for the occasion. Kayo and I were heavily involved in the preparations because we took charge of setting up the exhibit and making sure the guests had a solid creative experience. We had most of the artists involved bring in their paintings and art pieces to display at the event and sell as well.

Aside from setting up the art, we also painted our own 4ft heart and turned it into an interactive event center piece. We filled it with line illustrations of the many things people love about Ayala Malls like the cinemas, dining places, stroll-in gardens and the wide array of shopping options. The idea was for the guests to choose which image or aspect of the Ayala Mall experience they like the most and then color it in with paint. The guests happily participated and brought color to the “heArt” throughout the afternoon, in between enjoying the food and walking about to appreciate the artwork that filled the walls.

Aside from the art pieces hung on the walls, Kayo and I also designed and painted vibrant geometric hearts on the columns and walls around exhibit area. These, I really enjoyed doing! We wanted people to see something interesting at every turn.

We added a subtle white geometric heart outline on the floor and I was surprised to find that people liked it too and took photos of it and with it! We also painted these galactic stripes on the pillars on either side of the color-in heart. If only I could, I would’ve brought them home with me!

Another highlight of the event for me were these beautiful miniature hearts which were given away as gifts to the guests. They were painted by the same artists who worked on the giant hearts. Each of them had it’s own character and I thought it was just wonderful to see all of them lined up together like an army of love!

And then on Sunday, Valentines Day, we were at TriNoma for the big art festival we had organized to surround the live painting of the giant heart installations at the Activity Center called: A HeArty valentine. All malls put together their own events for that day but specifically for TriNoma, we had a full afternoon of simultaneous craft workshops and live art demos by some of Manila’s most sought after makers and crafters. It was a fantastic line up, I must say, and I’m quite grateful to be friends with these talented people!

The Craft Party Team brought in their A-game and joined us to keep the enitire event in order. Oh how secure we felt and how organized everything was because of these amazing people! Thanks Mia, Fhely, Mabs and Lia! (Too bad we didn’t have a team photo…Must keep that in mind next time haha!)

There was Love Lettering with Abbey Sy, Couples Rubberstamping with Mansy Abesamis of Hey Kessy, Paper Bouquet Making with Victoria Velasco, Brush Lettering with Anina Rubio, Basic Jewelry Making with Kim Tiam Lee of Pulseras by Kim and Couples Calligraphy with husband and wife Daniel Lei and Joannie Candi. It was quite awesome to have them all be part of this event! And I think the greatest part was the fact that passes to these workshops were FREE! TriNoma simply did a special mall promo for shoppers, diners and literally cardholders to get workshop passes days prior to the event. All those who participated obviously enjoyed learning new things and it was pretty cool that they got to take home the materials they used so they could keep working on their new found craft!

And then on top of every hour starting at 12:30pm, we did a series of free 20-minute live art demos in the amphitheatre. Most of the workshop instructors who were already there did demos but in addition, we had Alessa Lanot of Life After Breakfast come in to do a watercolor demo and Mabs Camacho of Mabby Makes show how to make a giant paper flower.

Demos ended at 7pm and to close the event, Nyoy Volante and Juris came out for some musical performances. Just about the same time, Kris, Egg Fiasco and Seikon finished painting their giant hearts. All three look awesome and even before they were done, everyone who passed by them would stop to take pictures. If you wish to see them “in person” just visit TriNoma and all other Ayala Malls. These gigantic hearts will be out for all to see for the rest of the year. In fact, if you take selfies with them and post your photos on social media, you get a chance to win a trip to El Nido. Click here for more details!

So yeah. It was quite an eventful Valentines weekend. Writing about has actually been quite overwhelming! But I can’t help but feel honored to have been given the opportunity to work with such talented people, even if it just meant watching them do a demo or putting their artwork up a wall. It was definitely an exciting experience.

But in all of this, the thing that I treasure most was the the way Kayo and I handled everything together. It was fun but it was undoubtedly a lot of work. We had many challenges and difficulties along the way as we prepared for multiple events, including Kayo and the kids getting sick close to and during the big dates, but supporting, collaborating with and covering for each other just came naturally between us. Even all the art we had to do were results of ideas we shared and put together. It was great teamwork, I must say, and that’s a big reason why it was such a memorable and important weekend to me. I’m very grateful to be married to someone I can easily and effectively work with professionally as well as accomplish great things with. It was, indeed, a huge weekend of growth for me and Kayo as artists and as a married couple. Like I said, this year’s Valentine’s was one for the books!

Apart from the artists and giant hearts mentioned above, there are several more situated in other Ayala Malls that were not art directed by Honeycomb. To see all the heart installations visit @iloveayalamalls or explore the hashtag #lovemhearts!

Three days to go before Valentines day! If you are looking for last-minute craft projects to do on your own or with your kids in celebration of the occasion, I have put together five easy but lovely Valentine projects you can try at home! GET LIT Give life to plain candles by wrapping them up END_OF_DOCUMENT_TOKEN_TO_BE_REPLACED

During last year’s lengthy lockdown , I delighted in looking through older family photos, specially those of our wanderings and travels. Tapping through thousands of shots became an escape and also a source of joy. I love photographs and their ability to transport me back to places I once visited and experiences I once had. END_OF_DOCUMENT_TOKEN_TO_BE_REPLACED

I would always get inquiries on Instagram about the journals I use so I thought it would be helpful to put together a blog post about it and talk a little bit about my system, as well as the products I use. Maybe it can help out those who are just starting out with journaling END_OF_DOCUMENT_TOKEN_TO_BE_REPLACED