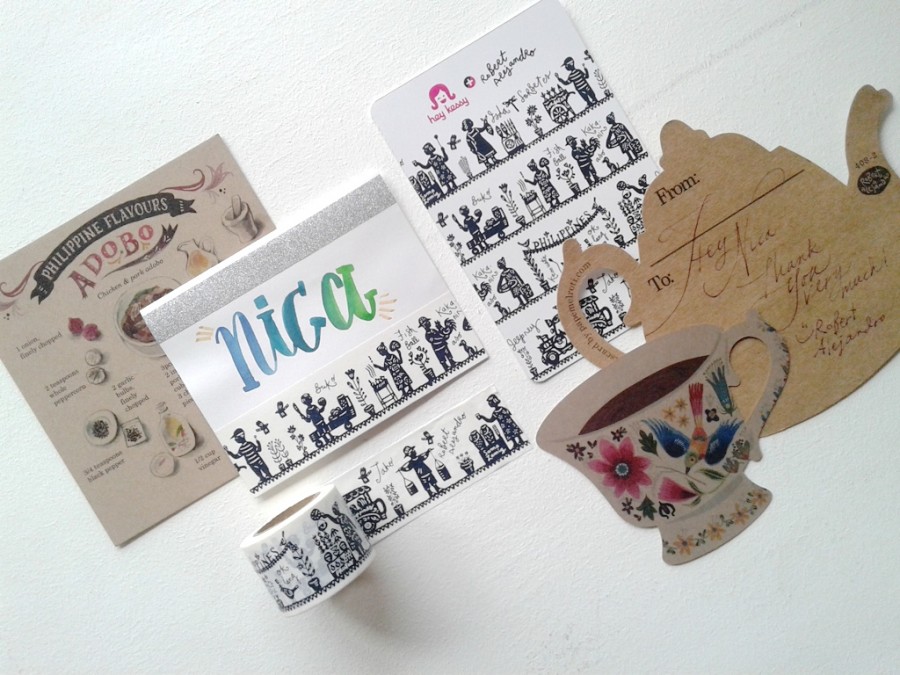 It’s always exciting to be in a room full people who are passionate about art and making.  I always come out of it fuller. And that’s exactly my experience last June 28 when I attended Hey Kessy‘s newest washi tape launch designed by the very talented Robert Alejandro at the Hey Kessy studio.

A specific mix of people where there — designers, crafters, letterists, illustrators, art lovers, some were Mansy’s long time friends, others she only very recently met online — but every single one eager to learn and to grow. I believe I’m speaking for every one of us there when I say that we learned much and were primed for more growth after having listened and spent some time with “Kuya” Robert.

First, he introduced himself and spoke a little about his art and projects. He told us about his decades of involvement in designing products for Papemelroti, his TV show in the early 2000s about crafts for kids, the way he enjoys looking at regular, mundane things and taking inspiration from them, sometimes using them to make extraordinary imagery. He showed us some of his work — illustrations, sculptures, paper mache, paintings — and how he never sticks to one style, ever evolving, always trying out new methods and media.

After that, he conducted a simple illustration workshop for us where we were divided into pairs and asked to make a portrait of our buddy.

He encouraged us to not judge or be worried about being judged, to simply draw as we saw each other and not be led by any standard or expectation. At first, it seemed easy, everybody drew according to their own styles, sticking to what’s familiar, but when Kuya Robert noticed this, he challenged us all to explore other styles, other methods, preferably something we were not particularly used to or even comfortable with.

The results were interesting. Some struggled, others were excited and ready to explore. Some discovered the change was actually better than what they were used to, while others realized there was no need to explore but simply improve on their current style.

I, for one, because of the 100 Day Project Friday Portraits, have been quite used to a single style, as you may have noticed by now. It’s a bit realistic and not quirky at all. But at the workshop with Kuya Robert, I decided to be a little bit more playful. I must say it was fun and quite liberating.

My drawing buddy was the very talented Tippy of Googley Gooeys. Of course hers was fantastic! But I’m still waiting to get her drawing of myself because we were asked to drop them in a mail box . So I’m actually expecting happy mail in the next few weeks!

I can’t help but feel very privileged to be at that event, not to mention, have been able to, though very briefly, exchange artistic thoughts with Kuya Robert. The major thing I took home from that morning was his words when he told me that it’s perfectly alright to always experiment and explore and not stick to one thing. I told him sometimes I feel very pressured when people ask what my main thing is because I can never really answer. And he said its okay because if that’s how I am able to express myself — through many different things — then that is good. He added that sometimes, specially when a certain art style is making us money, we get afraid to veer away from it because that’s what’s expected of us. But he said, that could very be the thing that will kill our creativity. We have to keep trying new things and never be afraid to do so.

I’m so thankful to Mansy for inviting me and, of course, to Kuya Robert Alejandro for gracing us with his presence and for very generously sharing with us his passion for art. It was, indeed, a very memorable morning!

It’s that time of year again and I’m pretty excited to set up and start another December Daily journal! It’s one of those little Christmas traditions I’ve set for myself which allows me to navigate the season with a little bit more intention. It’s a practice that allows me to find a more personal meaning END_OF_DOCUMENT_TOKEN_TO_BE_REPLACED

The girls and I were very fortunate to have been invited to the opening party of a new creative space and craft shop in Marikina City called TATY. That stands for Thrive And Trove Yard! Formerly known as Woak PH on Instagram, TATY is essentially a kids’ maker studio that promotes skill-building activities and provides END_OF_DOCUMENT_TOKEN_TO_BE_REPLACED

My daughters, Summer and Jo, started taking ballet classes last August. But last week, they attended their final session. They’ve decided to try and explore other things for now. Even so, I was actually surprised to see them enjoy ballet as much as they did. I really didn’t expect it. They enjoyed it so much END_OF_DOCUMENT_TOKEN_TO_BE_REPLACED