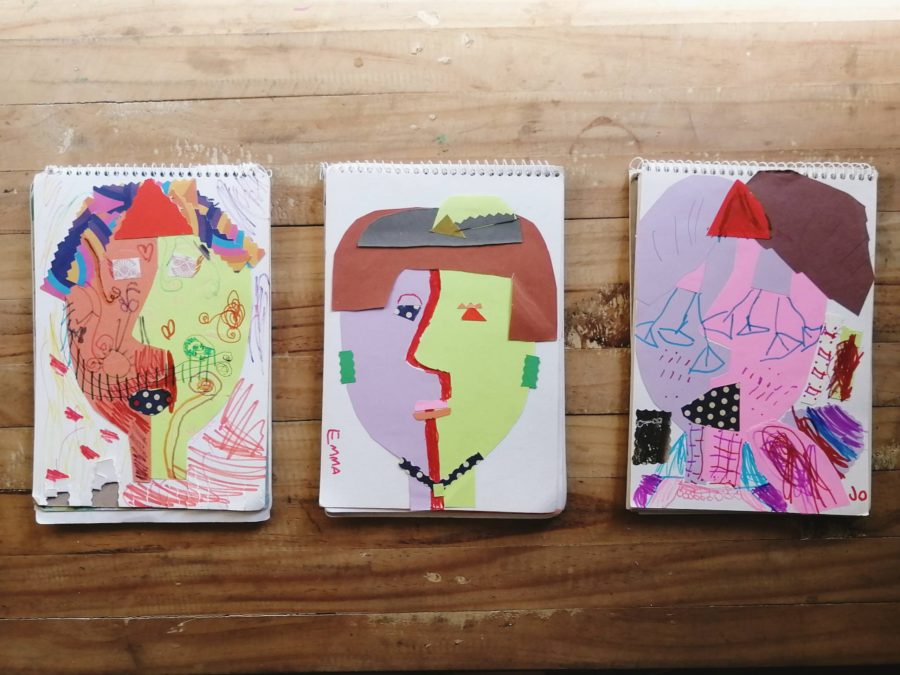 One of my goals this 2020 is to learn more about the lives and styles of different influential contemporary artists, both of our time and of the past. I also thought it would be best to include my kids in this year long venture into art history as part of their weekly art sessions at home. As an unschooling family, I’ve discovered that when I try new things alongside them, it becomes a much more memorable learning experience for everyone.

The goal is to focus on one artist each month. In January, we started off with Pablo Picasso who is widely known to have significantly shaped the direction of modern art in the 20th century. He invented Cubism, an abstract art style that makes use of simple geometric shapes and bold, vibrant colors to create a picture and portray emotion.

Cubism, I realize, is a fairly easy concept for small children to grasp. The use of simple shapes and the idea that they can mix and match any color is very appealing to them.

The first thing we did was watch a couple of videos on YouTube that talk about Picasso’s early life and help define his unique art style. The videos we saw are as follows:

We were fortunate to have received an art activity book called Get Into Art from my friend Amber. It really came in handy specially because it features, among other modern artists, Picasso, and focuses on one of his famous works, The Weeping Woman.

If you observe closely, almost all the portraits Picasso has painted show faces split into two highly contrasting colors and the facial features are not necessarily placed where one would expect. They look contorted and mysterious in a playful way. More often than not, the person portrayed shows more than one emotion which really makes you wonder what was going on with the model or the subject during the time it was being painted. For sure, there is some story behind it.

The Weeping Woman is actually a portrait of Dora Maar who was Picasso’s girlfriend. She is obviously in distress and crying in the painting. According to research, this may be because it was painted in the heat of the Spanish Civil War when so many people were suffering and dying.

For our first Picasso inspired project, we followed the paper collage activity in the book. Using assorted scraps of colorful paper, we created faces. I cut out half head shapes in various colors and gave the girls liberty to create their own color combinations. How to add the facial features was also entirely up to them as long as they use paper cut outs. Similar to the Weeping Woman, I told them to give their artwork its own title and maybe a short story.

The second project is also based on Cubism but this time, we used paint and worked on an outdoor scenery. Taal Volcano had just spewed ash and was all over the news during this time. The girls were naturally very curious about it so I thought it would be a good thing to paint the Taal Volcano before eruption.

I searched for beautiful photos of the volcano on Google and used those as reference. Similar to our first project, the exercise was to use simple geometric shapes to paint Taal Volcano and to be as daring as they can with the use of colors.

Finally, we added heavy, definitive outlines to our paintings which are prominent details in Picasso’s work. This last step really help make the artwork pop out.

I really love what they’ve created! In both projects, I observed that even if they had to work within certain parameters like what technique to follow and what subject to paint, each of their own styles still came out. Each of them had their own different approach to it which was exciting for me to witness.

This project turned out really well, not only for the kids, but for me as well. I was very happy to see my girls really get into it and I also very much enjoyed the whole process with them.

We’re looking forward to tackling the modern artist for the month of February — Yayoi Kusama!

As part of this project, I’ve decided to share our monthly art activities on the blog as reference for those of you who are interested and would like to follow along with your own kids. Feel free to do exactly as we have done or put your own spin to it!

Previous Post:
Let's Be Explorers Planner: A Closer Look
Next Post:
So Much More Than Just A Drawing Class

It’s that time of year again and I’m pretty excited to set up and start another December Daily journal! It’s one of those little Christmas traditions I’ve set for myself which allows me to navigate the season with a little bit more intention. It’s a practice that allows me to find a more personal meaning END_OF_DOCUMENT_TOKEN_TO_BE_REPLACED

The girls and I were very fortunate to have been invited to the opening party of a new creative space and craft shop in Marikina City called TATY. That stands for Thrive And Trove Yard! Formerly known as Woak PH on Instagram, TATY is essentially a kids’ maker studio that promotes skill-building activities and provides END_OF_DOCUMENT_TOKEN_TO_BE_REPLACED

My daughters, Summer and Jo, started taking ballet classes last August. But last week, they attended their final session. They’ve decided to try and explore other things for now. Even so, I was actually surprised to see them enjoy ballet as much as they did. I really didn’t expect it. They enjoyed it so much END_OF_DOCUMENT_TOKEN_TO_BE_REPLACED