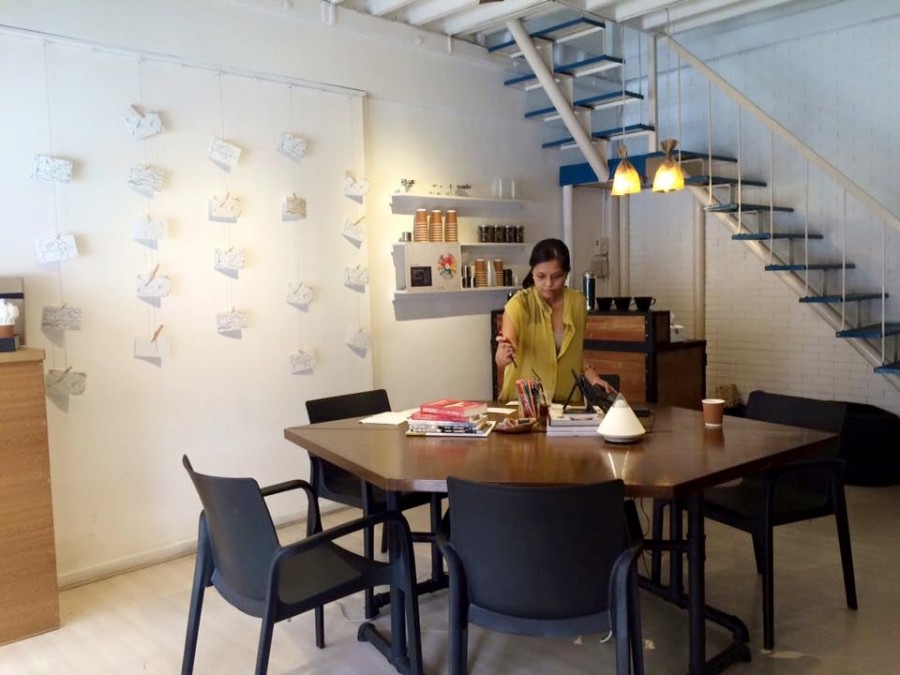 Some time five years ago, before we even had any kids, I remember going to a street party at Cubao Expo with Kayo and some other friends. I don’t recall what event it was but I do remember having really enjoyed it. There was live music, a couple of art shows, cool vintage finds, poetry, drinks, as well as many interesting people to meet. I also remember talking to Kayo about it days after and telling him how it would be interesting to run a place where many different types of art is welcome and hold events where people can just express their creativity without it being so formal or intimidating.

Years later (or should I say, three kids later…), we now own Honeycomb and I co-run Craft Party PH, which, in different ways, both accomplish those things I dream of doing. But to make it even more interesting, we all of a sudden find ourselves back at the very same place that inspired the dream of an art hub! Kayo and I, together with my sister in law Martine and her husband Ton, opened a creative space called Kendo at — you guessed it — Cubao X!

Kendo is an open space you can turn into whatever you need it to be. It can be a workshop venue, a meeting place, a photo or painting studio, a place to work or study, a crafts space — anything! I do plan to hold many craft gatherings here soon!

We chose to name it Kendo because we like how the word sounds and just like the martial art, the space is meant for sparring — a place to spar ideas, thoughts and artistic expressions. And on the side, we run a slow bar where we serve hand poured specialty coffee and cold brew from Shophouse Coffee Co.

We officially opened last Saturday, January 23rd with an Instameet, organized by Martine and Make It Blissful.

Of course we served coffee and as a treat to our guests, Lia’s Cakes in Season provided a strawberry shortcake, an avocado cake and lots of avocado cupcakes! Thank you Lia’s!

To make our friends’ visit to the space a little more creative and relaxing, Kayo and I prepared color-in postcards which we gave away with every cup of coffee. Coloring tools were also on the tables so as people chatted and sipped their drinks, they did a little coloring.

It was a really good day and we’re so thankful to all those who dropped by and expressed interest in holding future events and meet ups at the space. We’re excited to serve you! To those who simply want to hang out, we open after lunch everyday, except Sundays. Come on over and have a good cup of coffee with us!

Three days to go before Valentines day! If you are looking for last-minute craft projects to do on your own or with your kids in celebration of the occasion, I have put together five easy but lovely Valentine projects you can try at home! GET LIT Give life to plain candles by wrapping them up END_OF_DOCUMENT_TOKEN_TO_BE_REPLACED

During last year’s lengthy lockdown , I delighted in looking through older family photos, specially those of our wanderings and travels. Tapping through thousands of shots became an escape and also a source of joy. I love photographs and their ability to transport me back to places I once visited and experiences I once had. END_OF_DOCUMENT_TOKEN_TO_BE_REPLACED

I would always get inquiries on Instagram about the journals I use so I thought it would be helpful to put together a blog post about it and talk a little bit about my system, as well as the products I use. Maybe it can help out those who are just starting out with journaling END_OF_DOCUMENT_TOKEN_TO_BE_REPLACED