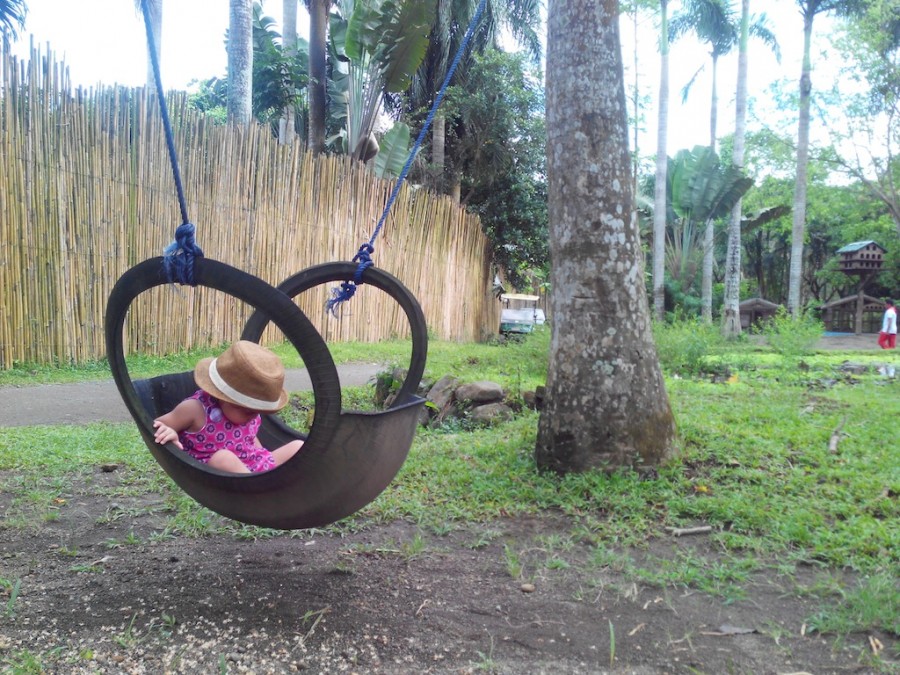 Our family, with some friends, headed out to Sta Elena last Sunday to go to the 4th Balik Bukid Country Fair. Kayo was actually there to cover the event but the kids and I went because I’ve been wanting to go since I learned about it a year ago.

When we got there, the first thing we did was visit the little petting zoo to show the kids the different animals. There were horses, cows, rabbits, pigs, chickens, turkeys, guinea pigs and even a python (in a cage of course!). There was also a big pond filled with fish and families of ducks swimming in it. Summer and Emma were wide-eyed and stunned to see them up close. After some time, Summer had warmed up enough and agreed to pet one of the bunny rabbits. There were also carabaos dragging carts on which you could ride in small groups.

Aside from the wildlife, there was also a bazaar were many different stalls sold local and handmade products. We didn’t get to shop so much but it was interesting to see the different stuff. There were beautiful ceramic chimes, stuffed animals, canvas bags, silk kimonos and pretty handcrafted art and accessories. Some of my favorite local brands were there, such as Silly Monkey Clothing, Bags by Rubber Tree and Brown Belly.

There was also a wide variety of food stalls to choose from. Everything looked so good. If I weren’t busy with the kids, I’m pretty sure I would have just kept eating! For lunch, Kayo and I both had Massimo burgers. I had the lamb and he had the wagyu, which were both really good. We also had a bottle of homemade ginger brew by Standford & Shaw. It’s probably the best bottle of ginger ale I’ve ever had. So good, I had forgotten to take pictures! But you can check them out here. Dining was not a problem because there were many proper picnic tables and benches available.

In the middle of the Balik Bukid farm was a pavilion were they had set up TVs and showed the Paquiao fight so the fans who were there that day would not miss it. That is also where they sold local craft beer, sangria, paletas, ice cream sandwiches and cold cuts to enjoy while watching the fight. Pizza Morena was also there serving wood-fired pizzas all day and its delicious smell filled the pavilion!

In the afternoon, we borrowed some banigs and set them up on a grassy area so we could lie down and relax while the girls snacked and played. I even fell asleep a little! Then, just before sundown, a mass was held at the same area, just under the trees. It was very solemn, a perfect time and place for prayer.

There was something fun for everyone at the Balik Bukid Country Fair. Aside from the things I had already mentioned, many other activities took place. There was that fantastic mud dash I saw happen from a distance, a kids yoga session, a puppet show, a live samba show and a concert in the evening featuring Rico Blanco, Lee Grane and the awesome Flippin’ Soul Stompers. There was also a a big play area for the kids, with a zip line and a huge sand playground and giant tire swings, which Summer enjoyed the most.

All of us had an amazing time, especially Summer. I’m so happy we went and that I got to bond with my girlfriends at the same time. It was pretty tiring because we did a lot of walking and stayed under the sun, but it’s the kind of thing I enjoy doing and would not mind doing again. Without having to go so far from the city, my family, friends and I had a fun, inspiring and memorable countryside experience. Thank you so much, Balik Bukid!

Thanks, Mare Collantes for taking some of the photos 🙂

It’s that time of year again and I’m pretty excited to set up and start another December Daily journal! It’s one of those little Christmas traditions I’ve set for myself which allows me to navigate the season with a little bit more intention. It’s a practice that allows me to find a more personal meaning END_OF_DOCUMENT_TOKEN_TO_BE_REPLACED

The girls and I were very fortunate to have been invited to the opening party of a new creative space and craft shop in Marikina City called TATY. That stands for Thrive And Trove Yard! Formerly known as Woak PH on Instagram, TATY is essentially a kids’ maker studio that promotes skill-building activities and provides END_OF_DOCUMENT_TOKEN_TO_BE_REPLACED

My daughters, Summer and Jo, started taking ballet classes last August. But last week, they attended their final session. They’ve decided to try and explore other things for now. Even so, I was actually surprised to see them enjoy ballet as much as they did. I really didn’t expect it. They enjoyed it so much END_OF_DOCUMENT_TOKEN_TO_BE_REPLACED