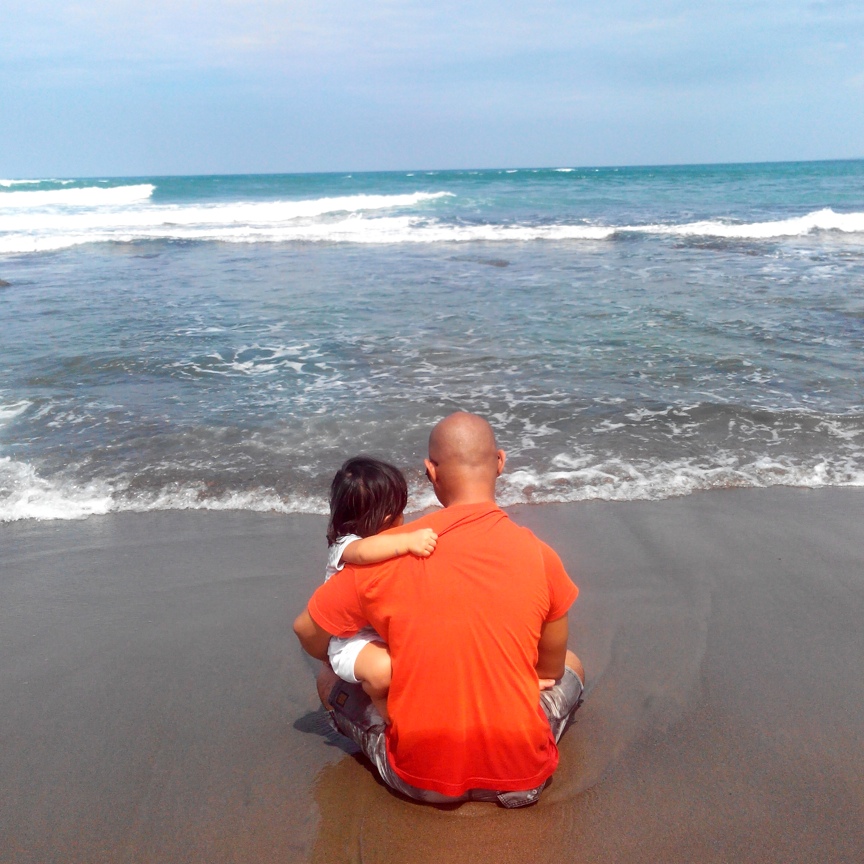 I’m so happy to be back blogging! The site was down for a few weeks so I haven’t had the chance to write about the craft projects I’ve been working on as well as the fun stuff we’ve been doing as a family. However, I’ve been diligent in writing about the things I want to share with you so expect a flood of posts within the next few days!

To start with, let me share the most recent: our family vacation to our little paradise up north, San Juan, La Union.

We drove up there with Kayo’s family for the long weekend, to celebrate his mom’s birthday and also to visit his brother, Kiddo, who currently lives there with his wife, Amy and their two kids, Cadence and Dylan. We have been there many times before and consider the place one of or homes. San Juan is where Kayo learned to surf, find the most dependable waves and where we have cultivated many meaningful friendships. It’s also where I see the most beautiful sunsets. It actually has been quite a while since the last time we where there so I’m very happy to have gone with the entire family.

We did what we usually do when we go there such as swim, surf and drive to the plaza in the morning for McDonalds breakfast. But we also did new things because many things have changed in San Juan since the last time we where there.

I particularly enjoyed lounging about the newly opened, off beat hostel by the beach called Flotsam and Jetsam. We did not stay there but we had lunch there on our first day and came over for drinks several times throughout the trip. They serve terrific iced tea and their own concoction of sangria is delicious! I also loved the entire vibe of the place. They have the perfect set up for painting and crafting or simply sitting back with a good book and an ice cold drink, while watching the waves roll back and forth the beach. I didn’t get to do exactly that but playing with the kids there was a lot of fun too.

Kiddo and Amy recently opened a small coffee shop in San Juan called El Union. I must say, they serve the best coffee out there and I’m so proud of them for putting it up. Naturally, the family hung around at the shop many times during the trip and we each had a cup of El Union coffee in the mornings and afternoons. Everybody who travels to La Union to catch waves must also take time to drop by the shop and get themselves a glass of Dirty White or Clean Black, which are their two popular drinks. They also serve Jack Daniel’s, Bailey’s and Cerveza Negra-caramel cupcakes, which go very well with the coffee. I drool thinking about it. I so miss getting my daily caffeine kick from El Union!

At Home at Urbiz Garden

Our home for the long weekend was a large seaside house called Urbiz Garden Plage. The back of it opens up to a beautiful and lush garden that leads directly to the ocean. The garden, the rooms and the veranda were very spacious so the kids had a grand time running around and exploring. There seemed to be no other guests around during our stay so we had the entire house to ourselves. It is a very pleasant house and so ideal for family vacations, specially a family our size.

You cannot be at a place like La Union and not get even a whiff of inspiration. I went there anticipating being inspired so I readied myself by bringing my watercolor set and drawing pens. My sister in laws brought theirs too so we spent some time painting and doodling together. It was a lot of fun. Even our kids joined us after a while. I also got to spend one early morning drawing at the beach and it was the most relaxing thing ever.

Ultimately, what makes all the things we did at San Juan fun and exciting is the ocean that was always close by. Whether we were having coffee at El Union, sleeping in our cozy rooms or lounging and catching up with friends at FlotJet, the rhythm of the sea and the voice of the wind were constantly singing to us. The ocean is what we were there to experience. Some of us swam it, stared hopefully at it, thoughtfully walked by it and a few of us surfed it. It was good and it did not fail.

One afternoon, while Kayo was out surfing and everybody else went to visit a friend’s home, I decided to stay behind and take Summer and Emma to the beach to play. My girls are not used to the ocean and don’t like the sand very much. Summer keeps saying it’s “dorty” (dirty)! So I was happy I got them to stay with me at the beach without any tantrums, even if they just stayed on the blanket. We snacked, sang songs, laughed and danced until sunset. I actually took a video of us having fun at the beach but my phone died before I could save it. I guess that meant the moment was just mine to keep. It was precious!

We also visited several other places to eat like Rose Bowl Chinese Restaurant and Gefseis Greek Grill where they serve absolutely authentic and delicious souvlaki. I also chanced upon my grade school best friend who I have not seen for maybe fifteen years except on Facebook and Instagram! It was a real treat seeing her and catching up with her.

Many fun and beautiful things happened during the trip and I’m so thankful to my in-laws for making it all happen and for taking good care of us and our children the entire time. It will definitely not be the last. Being there just convinces me more that we must keep coming back to the sea because it will keep calling.

2021 was a particularly unique year to our family. And it wasn’t only because of the pandemic but also because we lived a large part of the year in the town province of San Juan, La Union. What was meant to be a two-week visit to surftown for my birthday almost immediately transitioned to Kayo END_OF_DOCUMENT_TOKEN_TO_BE_REPLACED

Three days to go before Valentines day! If you are looking for last-minute craft projects to do on your own or with your kids in celebration of the occasion, I have put together five easy but lovely Valentine projects you can try at home! GET LIT Give life to plain candles by wrapping them up END_OF_DOCUMENT_TOKEN_TO_BE_REPLACED

During last year’s lengthy lockdown , I delighted in looking through older family photos, specially those of our wanderings and travels. Tapping through thousands of shots became an escape and also a source of joy. I love photographs and their ability to transport me back to places I once visited and experiences I once had. END_OF_DOCUMENT_TOKEN_TO_BE_REPLACED