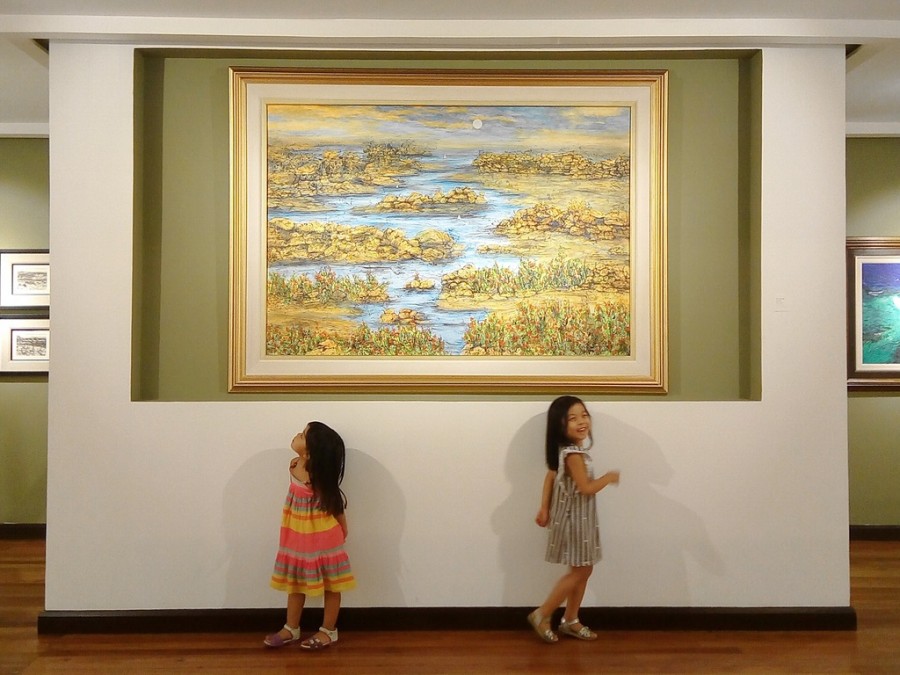 Sanso Museum is a gem in San Juan, Metro Manila. It is a serene pocket of inspiration in the middle of a very busy city. I was happy to have been able to talk my parents into going there one afternoon a couple of weeks back despite the horrid traffic. They were celebrating their 49th wedding anniversary and were looking for a new place to visit and explore. Sanso, I thought, Sanso Museum! I had been there late last year, when Craft Party PH had a Christmas-themed rubber-stamp carving workshop. But my parents hadn’t been and I was sure they would enjoy it. So we headed there with the kids and made it an hour and a half before closing, which was enough time to go around leisurely see everything.

They change the collection of paintings on display every few months. Currently, the exhibit is called Elogio Del Agua and is a selection of Sanso’s artwork all carrying the theme of water. It is the first of seven exhibits they are rolling out this year in celebration of his 70 years as an artist.

Aside from paintings, the exhibit also showcases some of his etchings, lithographs, serigraphs and photographs, most of which have never been shown to the public before.

Throughout the exhibit, they have posted on the walls stories about how water and bodies of water play a significant part in Sanso’s life. It was interesting to read and really explains why and how he is able to beautifully portray the colors and movements of water in his work. I also love how he has captured seas and rivers at different times of day, thus showing them in different lights.

Sanso Museum is small enough that you can explore it in an hour or less but because it’s such a pleasantly laid out art space and the atmosphere so peaceful and relaxing, you will want to stay longer. I would have definitely liked to stay a little longer if the kids hadn’t been with us. It was a nice visit nonetheless, and it seemed like my parents did have a good time. We’ll definitely be back in the future to see their upcoming exhibits!

Three days to go before Valentines day! If you are looking for last-minute craft projects to do on your own or with your kids in celebration of the occasion, I have put together five easy but lovely Valentine projects you can try at home! GET LIT Give life to plain candles by wrapping them up END_OF_DOCUMENT_TOKEN_TO_BE_REPLACED

During last year’s lengthy lockdown , I delighted in looking through older family photos, specially those of our wanderings and travels. Tapping through thousands of shots became an escape and also a source of joy. I love photographs and their ability to transport me back to places I once visited and experiences I once had. END_OF_DOCUMENT_TOKEN_TO_BE_REPLACED

I would always get inquiries on Instagram about the journals I use so I thought it would be helpful to put together a blog post about it and talk a little bit about my system, as well as the products I use. Maybe it can help out those who are just starting out with journaling END_OF_DOCUMENT_TOKEN_TO_BE_REPLACED