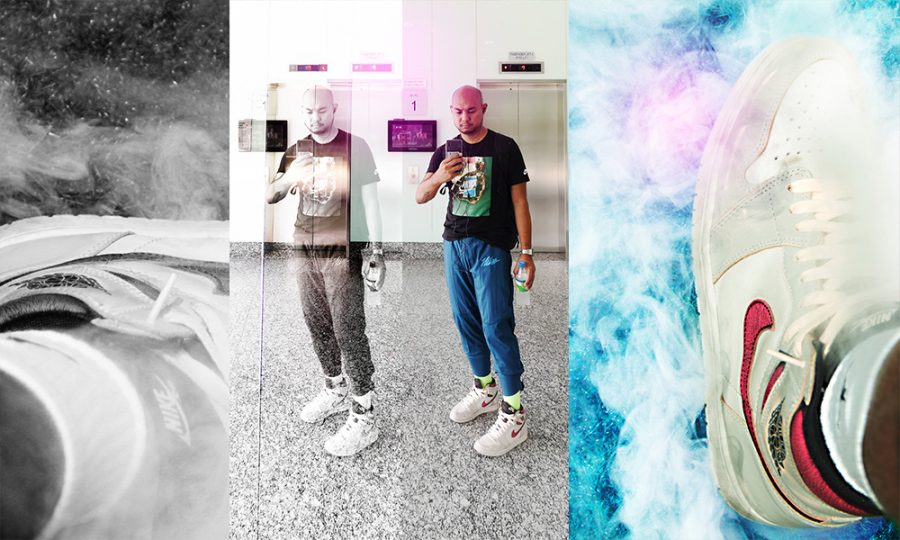 These are my first pair of Jordans. Mine is a common story: kid grows up in the 90s, watches via satellite as the greatest player to ever play the game of basketball decimate all foes. Dad and mom only buy each kid one pair of sneakers a year, and Jordan sneakers were pricey for kids.

On top of that, there was no basketball in my school. I would eventually save up my allowance and console myself with a black and red Wilson outdoor basketball purchased in Takishimaya Square’s “Stadium” sports store. The ball had MJ’s signature debossed into it, one of the goat’s many endorsements at the time. A neighboring condo block where I took my piano lessons had a full court. I would bike over with the ball in my knapsack and try to teach myself the game. One scrawny Filipino kid on a full-court in the tropical heat. The court was always empty, as it would seem that nobody in Singapore actually played basketball at the time.

I watched the Barcelona Olympics and though I and didn’t miss a single Dream Team game — some, even I would tape the games on VHS to rewatch over and over — I also was glued to the athletics events. I actually spent most of my youth as a sprinter. This is another key reason I never owned Jordans. Since I could only choose one pair of trainers, I always opted for running shoes. This was out of tactical necessity. I had a bad habit of looking at the guy in the next lane’s shoes to see if I had an upper hand. I know it’s stupid, but this is what the right shoe can do to your psyche.

The 1992 Olympics could be defined by the Dream Team, but also by peak-Carl Lewis, another hero of mine. Carl and I even shared the same events: The 100m dash, the high jump, and the long jump. Lewis would be the reason I would go on to choose red and white runners as my shoe of choice for years to come.

But with all that said, Englishman Derek Redmond in a yellow Nike track spike is the man who would eventually become (for me) the greatest Olympian of that era as he crossed the finish line of the 400m event. And it was not because he won.

In my teenage years, my parents would give me gift certificates to Rustan’s, a middle-class department store that’s in a lot of the malls here in Manila. The gift certificates were traded and claimed from credit card points that we had built up buying groceries. They were what I would use to buy myself sneakers. I was always a little bit short to afford the Jordan line, so I would pick up trainers like the Air Efsane or the Nike Free series. I used both for dance and basketball.

In 2019 I finally got these shoes, my first Jordan’s, at the age of 35. They were selected for me by the brand and are a collaboration between Nike SB and Jordan Brand. Poetically, they are in the New York to Paris colorway.

It’s been quite a flight, but I’m glad we’re here.

It’s that time of year again and I’m pretty excited to set up and start another December Daily journal! It’s one of those little Christmas traditions I’ve set for myself which allows me to navigate the season with a little bit more intention. It’s a practice that allows me to find a more personal meaning END_OF_DOCUMENT_TOKEN_TO_BE_REPLACED

The girls and I were very fortunate to have been invited to the opening party of a new creative space and craft shop in Marikina City called TATY. That stands for Thrive And Trove Yard! Formerly known as Woak PH on Instagram, TATY is essentially a kids’ maker studio that promotes skill-building activities and provides END_OF_DOCUMENT_TOKEN_TO_BE_REPLACED

My daughters, Summer and Jo, started taking ballet classes last August. But last week, they attended their final session. They’ve decided to try and explore other things for now. Even so, I was actually surprised to see them enjoy ballet as much as they did. I really didn’t expect it. They enjoyed it so much END_OF_DOCUMENT_TOKEN_TO_BE_REPLACED