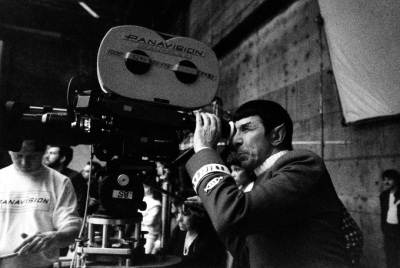 I’ve not yet been able to pay tribute to one Leonard Nimoy. Here goes.

Contrary to what most may think, I’m actually not that big a Star Trek fan, though I am certainly one. And yes, if I had to pick a character from Star Trek that I most relate to, then that character would undoubtably have to be Nimoy’s.

But when I think about which of his works I appreciate the most, I think I’d have to say that it was through one of his more — what’s the word? “Mainstream” directorial projects.

Three Men and a Baby. I’m never going to be Spock, but at some point, I’ve been all of these three guys. The architect, the cartoonist, and the actor. The one who buys the wrong diapers, the one who can’t figure out bottle feeding, and the one singing a baby girl to sleep.

And you know what? This movie and it’s sequel (though directed by another) have stuck with me very much throughout my life and certainly throughout these early years of fatherhood. They’ve stayed with me much more than The Wrath of Khan ever will.

Scenes from this now-classic are reminders that some of the grosser moments of babycare are to be approached with humor, comedy, and a little camera in your head for capturing the moment. Just to make sure that you remember the best parts of it fondly. The other night, I rolled over onto puke in my bed. Oh, Jo.

So thank you, Mr Spock. Nobody can ever question if you did indeed have emotions. Hopefully we’re all lucky enough to live out our own lives filled with domestic comedy and a little bit of fantasy.

And now, watch this video take a moment to reminisce with me and a little bit of Peter Cetera.

It’s that time of year again and I’m pretty excited to set up and start another December Daily journal! It’s one of those little Christmas traditions I’ve set for myself which allows me to navigate the season with a little bit more intention. It’s a practice that allows me to find a more personal meaning END_OF_DOCUMENT_TOKEN_TO_BE_REPLACED

The girls and I were very fortunate to have been invited to the opening party of a new creative space and craft shop in Marikina City called TATY. That stands for Thrive And Trove Yard! Formerly known as Woak PH on Instagram, TATY is essentially a kids’ maker studio that promotes skill-building activities and provides END_OF_DOCUMENT_TOKEN_TO_BE_REPLACED

My daughters, Summer and Jo, started taking ballet classes last August. But last week, they attended their final session. They’ve decided to try and explore other things for now. Even so, I was actually surprised to see them enjoy ballet as much as they did. I really didn’t expect it. They enjoyed it so much END_OF_DOCUMENT_TOKEN_TO_BE_REPLACED