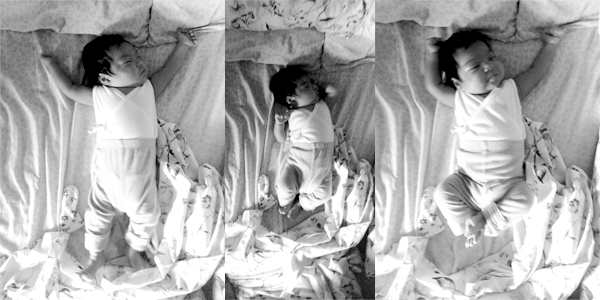 On October 16th, 2014, you came into our world. It’s been one month today. Much like your older sister Summer, you arrived as early as you safely could, just over 37 weeks. I called Lola Nelia at 1AM because your mom started having contractions in the middle of the night. Lola came to watch Summer and Emma while Lolo drove us to St Luke’s in QC. From that point, the whole process of going to the delivery room and having you took less than 3 hours. Mom tells me that she only pushed twice and there you were.

There you were. And here you are.

If I’m honest, we did have some trouble naming you, including some very last minute changes. We settled on Frances Josephine Garcia Cosio. Sorry it’s such a serious sounding name and that you’re going to have to learn a lot more letters than Emma will before you can write it yourself. I have this idea that second names make the whole thing more romantic. Don’t ask me why, I don’t really have an answer for that one.

I’d actually like to explain your name a little, which I’ll do in reverse order.

Your second name, Josephine is derived from the Hebrew Joseph, or Yosef, which means “The Lord Increases.” In addition to increasing the number in our family, we believe that with you will increase our love for one another as a family as well as the Lord’s grace and provision. It is a statement of faith and trust in God.

You’re actually named Josephine after the literary character, Jo March from Louisa May Alcott’s Little Women. It’s always been one of our favorite books, one that I first read when I was 9 years old. In the book, middle-child Jo’s notable creativity, strong femininity, and the four sisters’ perseverance & charity despite the family’s own poverty has long been an inspiration to us. Jo is not perfect, but she works hard to control her quick temper and even quicker tongue. Quite unusual for the era, Jo is presented with both her good and bad traits, which was a level of humanity that simply did not exist in the portrayal of female characters during that period. This is why one can consider Jo March as a significantly revolutionary female character. I hope that one day you can come to appreciate her as we do.

The book (and movie!) has meant many different things to us over the years, and I expect that this will be the case yet again, as we experience life with you and your sisters, our own batch of little women.

Literary names have kind of become a theme for you girls, with Emma being named for the Jane Austen novel, and Summer being named after Cyclops in the X-Men.

Just kidding. Neither of those are really true… or are they? Hahaha.

Literally it means “free man,” which is apt because I really wanted to name you after the current Bishop of Rome, Pope Francis. he has been a symbol and standard-bearer for a new era of freedom in the Catholic Church. This guy has been really inspirational and revolutionary with his “crazy” ideas like inclusivity, anti-proselytism, and no-cost annulments. I think that we’re only beginning to scratch the surface of what he’s going to accomplish.

Soon he will be visiting Manila, and that’s also one of the reasons I wanted to name you after him. I know it’s kinda cliche, but I don’t really care. 😛

Here’s a great bit from Pope’s General Audience in St Peter’s Square, the day you were born. It’s actually dated 10/15/14, but that’s really a time-zone thing.

…The Church, in addition to bride, is called to become a city, the symbol par excellence of human coexistence and relationally…. And in this glorious framework there will no longer be isolation, prevarication or distinctions of any kind — of a social, ethnic or religious nature — but we will all be one in Christ.

In sight of this wonderful and unprecedented scene, our heart cannot help feeling strongly confirmed in hope. You see, Christian hope is not simply a desire, a wish, it is not optimism: for a Christian, hope is expectation, fervent expectation, impassioned by the ultimate and definitive fulfillment of a mystery, the mystery of God’s love, in which we are born again and which are already experiencing.

So when you put Frances Josephine together, we wanted it to mean “The Lord increases freedom.” My hope for you, Jo, is that you grow up in the fullest freedom that life and catholicism can bring. Much like the Holy Father is talking about, may hope become a tangible reality in your life. May your patron saints, St Francis of Assisi and St Joseph (the earthly father of Jesus) guide and intercede for you throughout your life.

Three days to go before Valentines day! If you are looking for last-minute craft projects to do on your own or with your kids in celebration of the occasion, I have put together five easy but lovely Valentine projects you can try at home! GET LIT Give life to plain candles by wrapping them up END_OF_DOCUMENT_TOKEN_TO_BE_REPLACED

During last year’s lengthy lockdown , I delighted in looking through older family photos, specially those of our wanderings and travels. Tapping through thousands of shots became an escape and also a source of joy. I love photographs and their ability to transport me back to places I once visited and experiences I once had. END_OF_DOCUMENT_TOKEN_TO_BE_REPLACED

I would always get inquiries on Instagram about the journals I use so I thought it would be helpful to put together a blog post about it and talk a little bit about my system, as well as the products I use. Maybe it can help out those who are just starting out with journaling END_OF_DOCUMENT_TOKEN_TO_BE_REPLACED