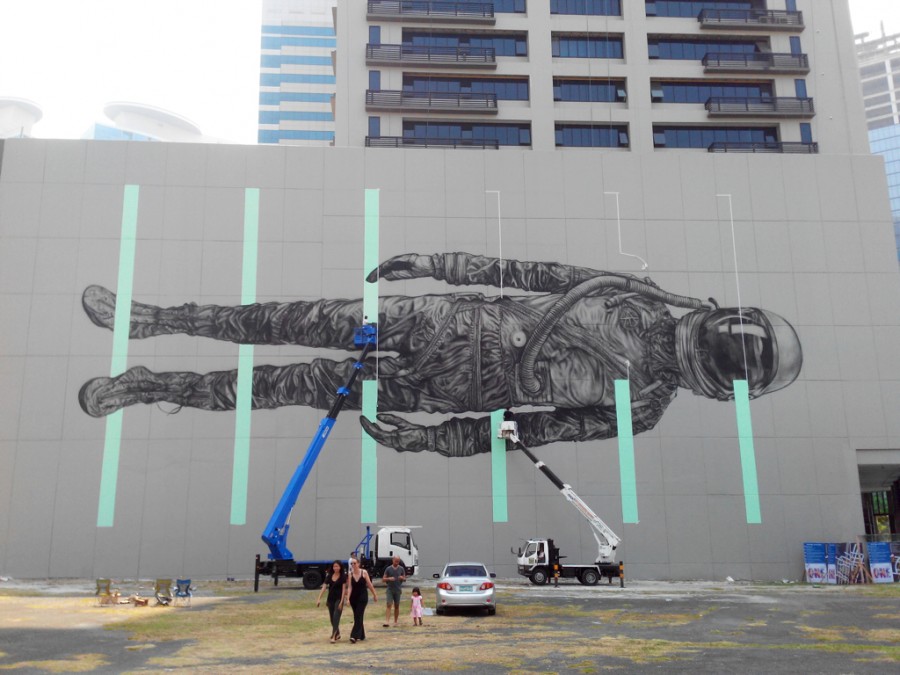 It seems like a very long time ago when I think of it, but it’s only really been three months since One, a week long art festival that took place at Bonifacio Global City. A fantastic mix of both international and local contemporary street artists amazed us as they took over walls and painted murals all over the city last May. Kayo and Honeycomb Communities, in partnership with Le Basse Projects, organized this event which is the first of its kind in the Philippines. And because Kayo was deeply involved in the event, busy attending to its many details, the kids and I had to uproot ourselves from our home and stay at BGC for a week and a half to be with him…and yes, of course, take part in the festivities as well.

It was a very exciting time for our family. First, because we got to meet such awesome artists and watch them work their magic. Second, because staying in a hotel for a whole week is so much fun for the kids (Yeah yeah okay, for me as well. No chores!) Third, because it’s a great learning experience for all of us as creatives and lastly, because Kayo and I celebrated our fifth anniversary as a married couple at the start of that week. So yes, so many things took place, every moment worth remembering. And I knew it would be that way so I prepared to document that entire time through words, pictures and memorabilia.

I brought a mini 4×4 album and a shoe box of scrapping supplies with me to the hotel and as often as I could manage, took photos, wrote down stories and collected memories. I had photos printed at a photo shop across the street every couple of days and at night or in the middle of the afternoon while relaxing in our room, I’d do some scrapbooking. I was very diligent at the beginning but towards the end, as we all got busy with festival concerns (and cranky, cabin-fever ridden kids) I had slowed down. I still kept taking photos and weeks after the festival continued documenting our memories.

Each day was fun and quite eventful but of course, I have my favorite moments. Let me share them with you through these photos and mini scrapbook spreads…

Title Page: This artwork background was cut out from an Aka Corleone print which we had several of. Love how this burst of color greets you as you open the album! Thanks, Pedro!

The week officially started with a dinner out with my one and only, celebrating FIVE YEARS of marriage!

LEFT: While at our staycation, Jo hit a milestone and decided to start sitting up by herself! RIGHT: The girls and I went city exploring everyday. There was always something interesting to see…and eat!

I made it a point to make a round of the walls in progress every afternoon. This spread features Cyrcle, where I included their “We Never Die” declaration sticker.

Some days we had visitors. Mia and her girls went on a picnic with us one afternoon.

We go on (mini) food trips too! Here’s us hitting Jamba Juice for fresh juices and Nolita for hot cheesy pizza!

RIGHT: It’s not all fun and games spending a week staying at a hotel…these kids had their sour moments and got cabin fever too! I included! 😛

The night before the last day of the festival, the kids and I with some of the festival staff hopped on the BGC bus to take a wall tour, We didn’t really have to because we walked to see the walls almost every day but I thought the kids would enjoy the bus ride and so we did. And I was right, they really had fun!

The festival finally ended but we spent a few more days with the artists who stayed behind finishing some of the walls and got to know them a little better. Those were good times! The kids enjoyed most specially.

LEFT: Final day at Seda. Photo shows girls in varying moods 😛 haha! RIGHT: Made a cover page for the photos of the finished murals

Included this illustration I made right after the festival while I was still very much hungover from it all!

The thing I treasure the most about that entire time was the privilege to get to know these talented people and learn from them. It was also wonderful for the kids to have witnessed them do what they do. Summer and Emma remember them because of their paintings and also because they played and drew with them. Even to this day, every time we drive by some of the walls, Summer would talk about the artist who painted it. “Drew painted that, right Mom?” “That’s by Rabi! He’s funny!”

Get to know all the artists involved by clicking this link.

The One Festival team and some of the artists

Kayo and I will always remember that week too. In fact, we talk about it all the time. It was one of our dreams to be able to take part in a creative endeavor just like it. Little did we know that Kayo would actually be one of those who makes it happen. That week taught us a lot of things. It was a great time but it was also a LOT of work but we are thankful to have been part of it, nonetheless. We hope and are working towards making stuff like it happen again so we can keep making walls, city corners, regular mundane things, come alive and uplift the spirits of those who walk past them daily.

I’m also glad I did document those days. My kids and I look through the pages of this album quite often and it does bring back happy memories and bring much inspiration — exactly what I wanted it to accomplish!

Kayo blogged daily during One too. To read his posts, go here.

Finally, watch this video, directed by Blaine Suque, that best captures the pure awesome that took place that week:

2021 was a particularly unique year to our family. And it wasn’t only because of the pandemic but also because we lived a large part of the year in the town province of San Juan, La Union. What was meant to be a two-week visit to surftown for my birthday almost immediately transitioned to Kayo END_OF_DOCUMENT_TOKEN_TO_BE_REPLACED

Three days to go before Valentines day! If you are looking for last-minute craft projects to do on your own or with your kids in celebration of the occasion, I have put together five easy but lovely Valentine projects you can try at home! GET LIT Give life to plain candles by wrapping them up END_OF_DOCUMENT_TOKEN_TO_BE_REPLACED

During last year’s lengthy lockdown , I delighted in looking through older family photos, specially those of our wanderings and travels. Tapping through thousands of shots became an escape and also a source of joy. I love photographs and their ability to transport me back to places I once visited and experiences I once had. END_OF_DOCUMENT_TOKEN_TO_BE_REPLACED