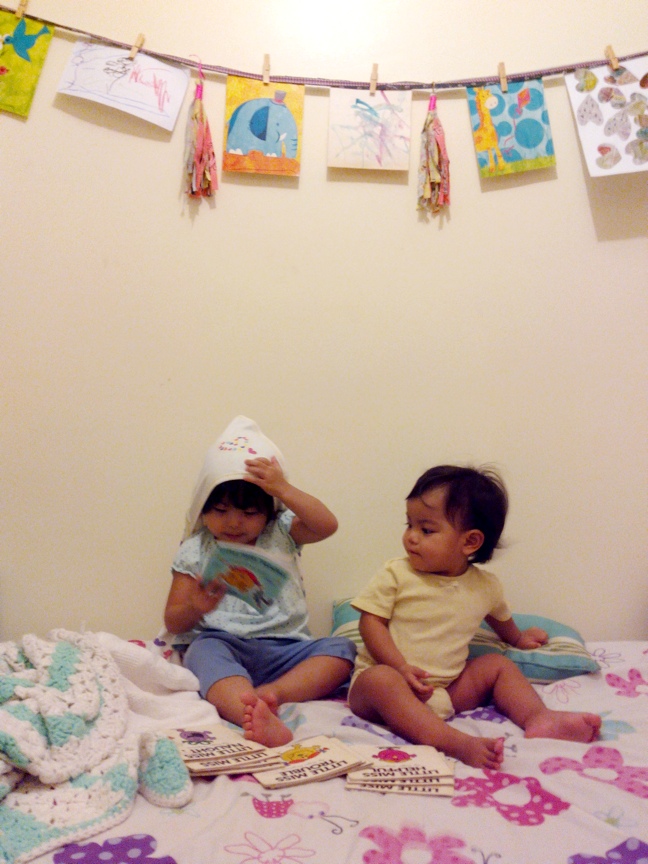 I only got a room of my own when I was eleven. We lived in a tiny two bedroom house and only when both my brothers got married and moved out did I get to take over their room. I remember being so thrilled, having dreamt about it since I was maybe seven. I excitedly worked on the place to make it look and feel like my very own.

Now that I have my own two little girls, I’m also quite thrilled for them to have their own room and also to have it early on. Well of course they’re sharing it and perhaps will do for the rest of their childhood and adolescence, but it’s great that they’ll have their own beds to sleep in, their own closet to keep, they’re own little space to play and grow up in, learning and doing things together.

They are still too young to decorate and organize but the last week, I did my best, just by adding a few things that did not cost me much, to turn it into their very own happy place.

The bed was a hand me down from Kayo’s aunt and it originally had a dark wood finish. When it was given to us, we decided to have it painted a light turquoise or blue, according to Summer, which is her favorite color.

I bought two large paper lanterns from Saizen at P88 each and chose designs that complimented the bed frame color.

Summer’s Ninang Isel gifted her with a moon-shaped night light from Ikea and so we installed it on the wall opposite her bed so she won’t tamper with it.

Of course I wanted Summer’s artwork displayed and eventually Emma’s, so I provided a clothesline up across the wall to hang them using wooden pegs. The clothesline is actually a long strip of cloth and I used two medium sized 3M Command hooks to secure the ends. Aside from drawings, I added some prints and finally, fabric tassels which I made myself. I made the tassels using old bandanas and scrap fabric in bright and girly colors. There are many sources online showing how to make these yourself but here’s the link to my own step by step tutorial: DIY Fabric Tassels

Summer and Emma are sharing one fairly large cabinet, which we had made, to keep clothes, toys and their other stuff. We had a bar installed to hang their dresses as well as shelving on the top and bottom. But instead of having drawers made, to save some cash, we decided to buy medium sized storage boxes with covers to hold their things. In SM department store, I found boxes in a color very similar to Summer’s bed so I got those and divided the girls things into them, labeling them accordingly (Using washi!). I think I need to get a couple more, but right now, I’m already loving how neat and organized their closet looks (Again without costing me so much!). I intend to keep it that way and little by little train them how to keep it organized themselves.

In the near future, I’d like to add more framed photographs and artwork on their wall. I’m also hoping to get them a floating shelf for their books, but for the meantime, they’re stacked in the empty aircon box and it works just fine hehe.

It’s really a tiny bedroom but no place is ever so tiny that you can’t make it look nice and neat. You won’t need to spend so much too! Every time we have guests, Summer tells them to look at her room and see “how nice” and “so pretty” it is. Emma also excitedly points at the moon on the wall and the “balls” up the ceiling. I’m really happy to be able to make their room a place they love. Kayo and I also quite like it there too! 🙂

It’s that time of year again and I’m pretty excited to set up and start another December Daily journal! It’s one of those little Christmas traditions I’ve set for myself which allows me to navigate the season with a little bit more intention. It’s a practice that allows me to find a more personal meaning END_OF_DOCUMENT_TOKEN_TO_BE_REPLACED

The girls and I were very fortunate to have been invited to the opening party of a new creative space and craft shop in Marikina City called TATY. That stands for Thrive And Trove Yard! Formerly known as Woak PH on Instagram, TATY is essentially a kids’ maker studio that promotes skill-building activities and provides END_OF_DOCUMENT_TOKEN_TO_BE_REPLACED

My daughters, Summer and Jo, started taking ballet classes last August. But last week, they attended their final session. They’ve decided to try and explore other things for now. Even so, I was actually surprised to see them enjoy ballet as much as they did. I really didn’t expect it. They enjoyed it so much END_OF_DOCUMENT_TOKEN_TO_BE_REPLACED