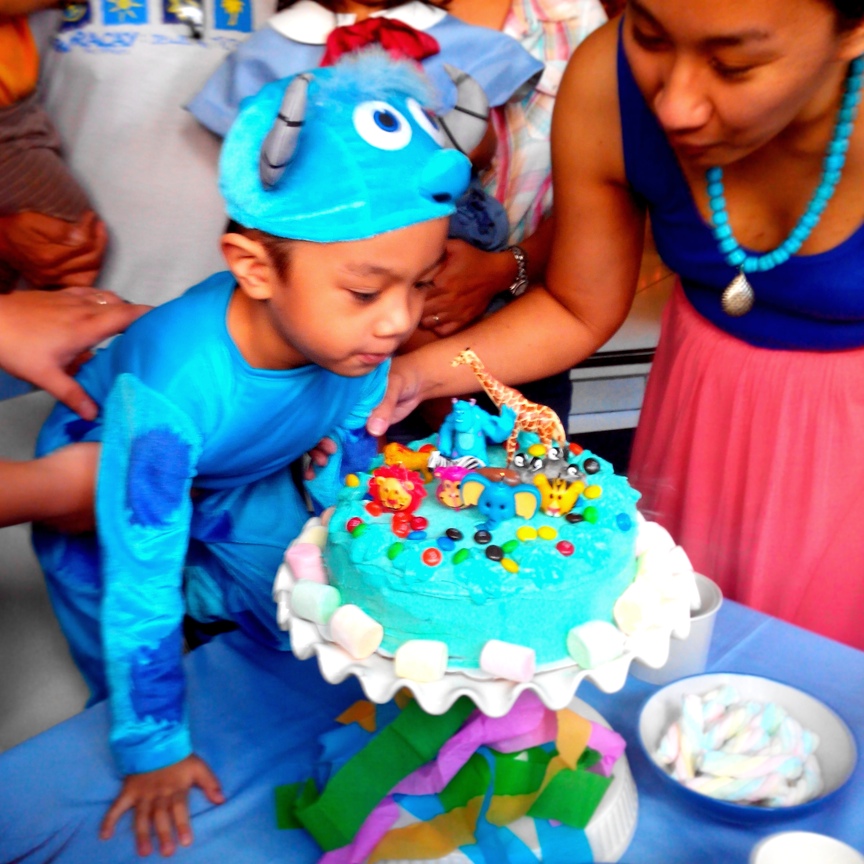 This weekend was all about celebrating my nephew and godson, Vito, who turned four last November 8. His parents threw him a super fun and colorful party yesterday and the theme Vito chose for his celebration was “all my favorite things.” That meant it was a spectacular mix of Monsters Inc, Lego, animals, paint and crayons. Martine, his Mom, asked me to help out with decor. Of course, I was happy to do it!

I included some of Vito’s drawings in this party invite I made for him.

Super easy paper buntings made by yours truly, with a little help from Summer too.

Ton, Vito’s Dad, asked me to make some stamps for the kids. So I carved out a giraffe stamp and a second one that says “Vito.”

All the kids came in costume as their favorite toys or cartoon characters! Many of them were home made outfits. Here are my girls, niece and nephews in their wonderful costumes:

Summer as a lion. We got her headband at Saizen for P40 and I made her tail using scrap fabric I found at home.

Emma as a red Lego block. I was up til 4am the night before making this costume! Kayo and I thought of it a few days before and I had already imagined how cute she’d look like in it so I just had to do it! Made this using an old red onesie, foam, red fabric scraps and some needle and thread.

Cadence as Madeline. Isn’t she so adorable? Her hat was the only thing her Mom, Amy, really spent on. Using materials available at home, C’s cute cape was made by Lola Nelia just a few hours before the party, lining and all! She looked great and truly embodied Madeline that she won best costume!

Dylan as Sid of Toy Story. This was also such a great costume idea. Amy (also D’s Mom) just taped a pretend rocket made of plastic bottle and some sheets of foam around his toy Buzz and then stuck a cut out skull on D’s dark colored shirt. Dylan already has the same hair cut as Sid, so with that smug look on his face, he had the complete look nailed.

Of course, Vito had the best costume. He came as Sully of Monsters Inc. He looked like such a big boy in his awesome monster suit!

It was a simple party, yet lots of fun! Even I enjoyed, especially while watching the kids run around in their costumes. Kudos to Ton and Marts for making Vito’s every wish come true by throwing him this party. It was great to see Vito having an awesome time, playing with his favorite toys, surrounded by his favorite people.

It’s that time of year again and I’m pretty excited to set up and start another December Daily journal! It’s one of those little Christmas traditions I’ve set for myself which allows me to navigate the season with a little bit more intention. It’s a practice that allows me to find a more personal meaning END_OF_DOCUMENT_TOKEN_TO_BE_REPLACED

The girls and I were very fortunate to have been invited to the opening party of a new creative space and craft shop in Marikina City called TATY. That stands for Thrive And Trove Yard! Formerly known as Woak PH on Instagram, TATY is essentially a kids’ maker studio that promotes skill-building activities and provides END_OF_DOCUMENT_TOKEN_TO_BE_REPLACED

My daughters, Summer and Jo, started taking ballet classes last August. But last week, they attended their final session. They’ve decided to try and explore other things for now. Even so, I was actually surprised to see them enjoy ballet as much as they did. I really didn’t expect it. They enjoyed it so much END_OF_DOCUMENT_TOKEN_TO_BE_REPLACED